I first made it to Petersburg when I was already fairly aware of things – when I was about 18 or 20. I went for a week with firm plans, to look at museums. It was winter and I didn’t see anything of the city. But I did see the Hermitage, and El Greco’s “St. Peter and St. Paul”, the Rembrandt room, and the Impressionism collection. I also made it to the Russian Museum but came out only remembering Serebryakov.

For many years Petersburg remained simply a city of museums for me. It was only much later, when I’d already got to know Paris, that I began to overcome my ignorance. Now I think maybe fate treated me well after all, sending me first to understand Paris, and only after to St. Petersburg.

It was only after falling in love with Paris – with its everyday life, culture, museums, cafes, bridges, streets, and its sycamores; only after realising it was one of the biggest cultural centres of Europe and the world – it was only then that I could understand what Petersburg meant to me personally and to world culture.

Maybe I am lucky that I started to love this city already as an adult, when I was over 40. I lived on Vasilevsky Island, walked around the city, felt the links to different eras while moving my hand along the stones of houses, along the marble sculptures of the Summer Garden. I breathed in the air of the sea that was so close, watched the ships enter the harbour. All of this was mine – the bridges and embankments, the raising bridges, the Winter Palace, the Anichkov Bridge, Moika… It was all the unique music of the city.

For me Petersburg is not the “Cradle of Revolution”, but it certainly is the cradle of our national culture. One of my grandfathers studied here in the Communications Institute, while another one served in the Army Joint Staff here before the revolution. Golovin worked here, the Silver Age was born here and so were the Miriskussniki. Chaliapin sang here, Tovstonogov worked here, the artist friends of mine whom I admire and love work here… Latif Kazbekov, Lukka, Sazhin Kolya, Slava Mikhailov… Here in Petersburg, there is Yura Shevchuk, to whom I am forever grateful for his albums “Black dog” and “Motherland” – and for everything else that he has done.

I will keep coming back to this city. I really want to climb across the rooftops with my friends, to have a swig of whiskey while sitting on a nineteenth century chimney stack… I want to do this in June, when the white nights are in full swing. They are different here than those we have in the Kola Peninsula – they are tender and pearly, they seem to light things up from within; the whole city is lit up with an inner light. And also I want to walk along the Moika Embankment in winter, and then look into some cafe. Warmth, coffee, cognac, a smoke, and silence… 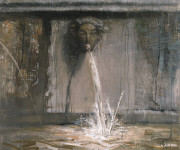